One of my UrbanNature Interventionist students suggested this film – it’s at once  shmaltzy, beautifully shot, and umwelt-shifting!

Here’s chapter one, but you can watch the full 50 minute doc at Nature/PBS. It premiered in Nov 2011.

Watch My Life as a Turkey on PBS. See more from Nature.

Many of your pet fowl questions can be answered here, including how to diaper your goose or duck. The pictures say far more. 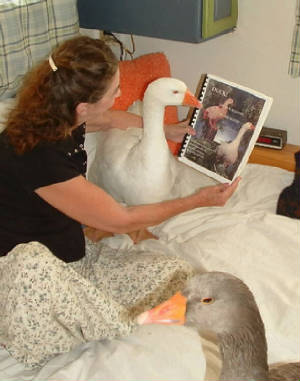 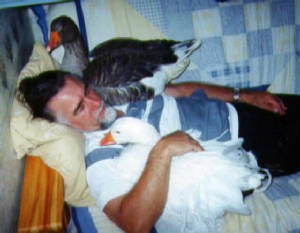 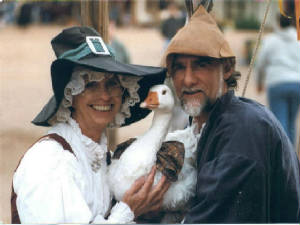 I’m visiting awesome friends Ruth and Oliver in Cortes, They have been incubating and raising Khaki Campbell ducks for a couple of years. They’re apparently excellent egg layers (averaging 300 a year!) but apparently this breed fixity on pumping out eggs has created unreliable (characterized hesitantly as terrible) mothers.

So Ruth and Oliver set a clutch of 10 eggs in the incubator 28 days before I landed on July 30, and right on schedule, one hatched late that night. Apparently around midnight, another one hatched and two more have broken  the outer layer of their shells. So I am trying to sort out whether to ‘adopt’ one for the duration of my stay. I can’t take it to Brooklyn when I leave in 2 weeks.My questions: is it mean to isolate the duckling for my bonding pleasure? Is 2 weeks too soon to rip it from its mother (me) and introduce it to its duck brethren? I found this useful matrix from an uncomfortably compelling (more on that later) interspecies site called  The Goosemother:

DUCKLING is a DUCK.

MOM is a DUCK.

DUCKLING is also a DUCKLING SIBLING

DUCKLINGS grows to be DUCKS.

MOM is now just another DUCK.

DUCKLING is a HUMAN

MOM is a HUMAN

DUCKLING is also a DUCKLING SIBLING

DUCKLINGS grow to be DUCKS

DUCK may love MOM, may NOT

DUCKLING is only HUMAN.

DUCKLING grows to be DUCK

From this matrix, I’d deduce the humane (duckiest) thing to do would be to raise a few of them together, let them all love me, and let them know duckhood. Ruth says I won’t have the intense pleasure of that 1:1 bond… I am torn by temptation. Imprinting occurs at a particular time termed the sensitive period during early postnatal life. For example, in anserine birds such as ducks and geese, the time for imprinting is 24-48 hours after hatching when the ‘following response’ is learnt. At this time a gosling learns to follow his mother who is normally the first large moving creature in his world. In fact, of course, the visual stimulus that he imprints on does not necessarily have to be Mother Goose. In these species imprinting can occur on any object within a certain size range regardless of its colour or shape. Movement helps to attract attention but is by no means essential.Although the dominant sense involved in imprinting is sight, sound and olfaction are also involved. In a variety of experiments, young chicks and ducklings were imprinted on humans, wooden blocks and classically even old gum boots. They bonded with a single item and would follow it wherever it went. Rather like Mary and her little lamb, Konrad and his little gosling were to go on to form a life long association. Although Lorenz was the first to record his observations in a scientific manner, the essence of imprinting had long been recognised. Indeed, Chinese peasants have for centuries capitalised on the tendency to imprint in making ducks more effective in the control of snails that otherwise damage rice crops. By imprinting ducklings onto a special stick, the peasants can not only take their brood out to the paddy fields as required but, by planting the stick sequentially in different parts of the plantation, they can ensure that molluscs in all areas can be subjected to predation.

Imprinting seems more important in precocial species, in which the offspring are less dependent on their mothers for food and warmth, than in altricial species which often confine their more vulnerable, and often hairless, young to nests. This is why many horse breeders are recognising the life-long benefits of thorough handling of their foals during the first 24 hours of life. Altricial neonates, on the other hand, are unlikely or unable to stray from their home base in the first few days of life and therefore do not need the same response. They learn similar lessons rather later in life during what are called “socialisation periods”. These apply when the animal’s sensory, motor and thermoregulatory systems are fully functional and they learn to move away from their mother and to interact with others of the same and other species. The window of opportunity for learning varies according on the species. In dogs it is from 3-10 weeks and in cats 2-7 weeks, while in primates it is usually 6-12 months. Stimuli that the youngsters of each species are exposed to during these window periods will be accepted as being “normal”. We do well to exploit this limited learning opportunity in our companion animals.

The imprinted knowledge is retained for life. Of all forms of learning, imprinting is the least likely to be forgotten or unlearned.

3. Imprinting establishes an individual animal’s preference for a certain species

Contrary to what one might predict to be their genetic tendency, once they have imprinted, animals will always prefer to follow the learned stimulus rather than a member of their own species. The following response in ducks that have imprinted on humans means that the ducks will preferentially follow any human rather any duck.

4. Some behaviours are affected by imprinting more than others

Not all behaviours are affected by imprinting. Lorenz noted with some amusement that jackdaws that had imprinted on him would court his favour by presenting him with juicy fresh earthworms and would even attempt to introduce these into his ear-holes. However, when not sexually aroused, these birds would happily join other jackdaws in flight. In sexually dimorphic species (in which the external appearance of males and females differ), sexual imprinting varies depending on whether the youngster is male or female. So, while a male mallard duckling will identify his future mate by relating it to the appearance of his mother (or attachment figure), the same does not apply for a female. While falcons imprinted on humans require a combination of human and avian stimuli to elicit sexual responses.

Sukadana, a small coastal city in western Borneo, is in the midst of a building boom. But the new houses are not for people. They are giant birdhouses playing an all-day siren call through booming speakers to a small bird whose edible nests — at almost $1,000 a pound — produce a broth that is highly prized, and highly priced, in China.