Wounded landscape: how Norway is remembering its 2011 Utøya massacre | Art and design | theguardian.com. 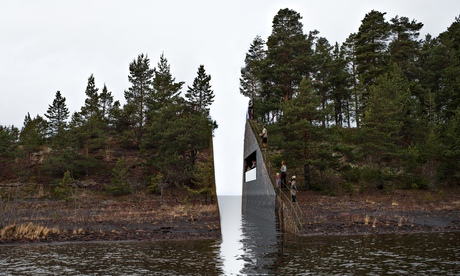 I find the decision to wound the land itself a disturbing response to a massacre by a human. Reminds me of burning animals at the stake as proxies. I’d suggest renaming it: Wounding the Landscape

You can download the report in its entirety, including numerous maps like this one, from the U.S. Army Corps of Engineers web site (if you’re looking for maps like the one up top, you want to click the link on the lefthand side of the USACE website that says “Fisk 44 Oversized Plates.”  (thanks io9)

Most ecologists and conservationists would describe this forest in scientific jargon as ‘degraded’, ‘heavily invaded’ or perhaps ‘anthropogenic’. Less formally, they might term it a ‘trash ecosystem’. After all, what is it but a bunch of weeds, dominated by aggressive invaders, and almost all introduced by humans? It might as well be a city dump.

A few ecologists, however, are taking a second look at such places, trying to see them without the common assumption that pristine ecosystems are ‘good’ and anything else is ‘bad’. The non-judgemental term is ‘novel ecosystem’. A novel ecosystem is one that has been heavily influenced by humans but is not under human management. A working tree plantation doesn’t qualify; one abandoned decades ago would. A forest dominated by non-native species counts… even if humans never cut it down, burned it or even visited it.

No one is sure how much of Earth is covered by novel ecosystems.

I think whoever owns the property can do with the property as they wish, and if the coal company buys it from a private property owner and they want to do it, fine. The other thing I think is that I think coal gets a bad name, because I think a lot of the land apparently is quite desirable once it’s been flattened out. As I came over here from Harlan, you’ve got quite a few hills. I don’t think anybody’s going to be missing a hill or two here and there.

And some people like having the flat land. Some of it apparently has become quite valuable when it’s become flattened. And I think they do a good job at reclaiming the land, and you know, adding back in topsoil, bringing in help. So the bottom line is, it’s not just me pandering to coal. It’s me believing in private property.

Things of course are nothing like what they appear. Land like any other time-based and event-based instance needs to be decoded or requires literacy to understand its stories.

Last week I was generously welcomed to Allenheads Contemporary Arts by founders & artist producers  Alan Smith and Helen Ratcliffe, and by Hannah Marsden, curator of their recent show Exploring Nostalgia (see earlier post on dead moles in dresses). Alan gave me an intense tour of the land, 2 hours of condensed experiential learning by car and foot – jumping up and down on the watershed land (a spongy trampoline), looking at charming, flower-strewn brooks (actually garbage middens from 19th c lead miners), and learning to read the vertical scars on the hills – channels made by huntsmen to drain the highland moors for better pheasant and grouse hunting conditions. Underground, a white-lime painted maze of tunnels that takes you forward in time as you go further in (newest last); this work of burrowing has, like worms, left giant-sized man-castings on the surface which look like naturally  picturesque bumps and hillocks.

I thought there was an odd and distant kinship to New York/Staten Island’s Fresh Kills Landfill, of a long term land shape that’s formed from the inside out, entirely by man (see “Why Call Them Landfills? They are dumps, eyesores, middens and disgraces.”)

I saw wild Exmoor Ponies, a feral breed of horse, up on the moors near High Green. They’ve been brought here from Devon in a land management scheme – eating invasive grasses and bracken in the hope that rarer wildflowers will flourish. They also don’t touch the heather.

Exmoor ponies are a hardy breed who have for centuries survived in a harsh and sometimes treacherous landscape. These fascinating, half-wild creatures have gentle looks and a willing nature, they are descended from wild horses domesticated by the Celts of pre-Roman times and are now conserved as a ‘rare breed’. (Pictures of England) Livestock break up the soil for wildflowers to seed into and the Exmoor ponies are ideal for this as they are environmentally friendly and less destructive than large machinery, will eat the most vigorous and inhospitable plants such as gorse and can penetrate the smallest and most remote locations.

Exmoor ponies are classified by the WWF-UK as “critically endangered” due to their dramatically decline in numbers since the 2nd World War.  The ponies to be used at Kielder will be used on grazing schemes for the next few years until they are old enough to be sold as family ponies – their places will then be taken by another group of younger ponies in the scheme. (Northumberland Wildlife Trust) Like the wild cattle, if you stay long enough they tend to be curious and will come right up to you to inspect.  They’re lovely, with coloration that looks like it got rubbed away in places.